Traditionally, the name of "coalitions" is given to the wars between France and the rest of Europe from 1792 to 1815. The first coalition was formed in 1792 and the last one ended with the second Treaty of Paris, on November 20, 1815.

It was formed by Prussia and Austria in May 1792, following the declaration of war launched by the Legislative Assembly to the German Emperor Francis II. England and Holland joined the coalition in February 1793, then Spain (March 1793), Portugal, the Kingdom of the Two Sicilies and the Kingdom of Sardinia.

Operations were first marked by the french victories of Valmy (François Étienne Kellermann, on September 20, 1792) and Jemmapes (Charles François Dumouriez, November 6, 1792), but the year 1793 began with a series of setbacks which put very seriously the homeland in danger. The reforms launched by Lazare Carnot and the divisions between allies finally permitted to repel the foreign invasion by the French successes in Hondschoote (Jean Nicolas Houchard, September 8, 1793) and Wattignies (Jean-Baptiste Jourdan, October 15 and 16). Revolutionary France even took the offensive and made itself master of Belgium and Holland by the victory of Fleurus (Jourdan again, June 26, 1794).

England remained alone to continue the struggle against France.

The French Republic came out of this war having acquired Belgium, the left bank of the Rhine, Savoy and the County of Nice. France could further rely on satellite states created in northern Italy: Ligurian Republic and Cisalpine Republic. 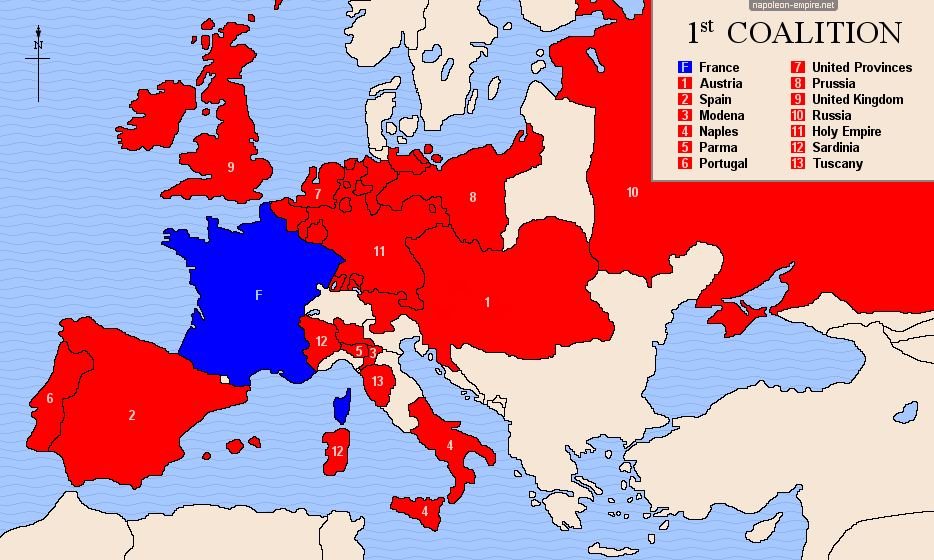 The members of the first coalition against France (in red)

England took the initiative to bring together this coalition. It did so from September 1798 to March 1799, gaining Russian alliances (following the capture of Malta, whose Tsar Paul 1 was the protector, by the French troops sailing to Egypt), Ottoman (in response to the invasion of Egypt), Austrian (after the declaration of war of the French Directory in March 1799, following the free passage offered by the Holy Roman Empire to the Russian troops), Neapolitan and Swedish. Some German principalities completed the system.

The war began with setbacks for the Republic. Alexander Suvorov, in August 1799, drove out the French from Italy. But French victory of Zürich on the Austro-Russians (André Masséna, 25-26 September 1799) and the capitulation of the Anglo-Russian expeditionary force in Alkmaar, Holland (October 18, 1799) restored the situation.

A few months after his return from Egypt, Napoleon Bonaparte passed the Alps at the head of the Army (Grand Saint-Bernard Pass, May 1800) and inflicted to the Austrians the defeat of Marengo (which saw the death of Louis Charles Antoine Desaix, main responsible of victory).

At the end of the year, on December 3rd, 1800, Jean Victor Marie Moreau won the decisive victory of Hohenlinden, forcing Austria to treat.

The Peace of Luneville (February 9, 1801) recognized again to France the possession of the left bank of the Rhine river; to which was added Italy except Venice.

The King of Naples signed the peace in his turn, on March 18, 1801 (Treaty of Florence). Having little interest in promoting hegemonic views of England on seas and on trade, Russia imitated him, on October 8, 1801, by signing the Treaty of Paris.

Isolated again, Britain, exhausted, agreed to sign the Treaty of Amiens (March 25, 1802). It rendered to France all its colonies but avoided to rule on the French acquisitions on the continent.

On May 16, 1803, barely a year after the Treaty of Amiens, relationships between France and England were broken again. The latter then began looking for allies and found them among the major European powers dissatisfied with the interventionist policy of Napoleon Bonaparte: resolution passed on 25 February 1803 by the Imperial Diet of the Holy Roman Empire ("Reichsdeputationshauptschluss") which changed from top to bottom the political balance of Germany; Act of mediation (19 February 1803) which reorganized Switzerland; creation of the Kingdom of Italy in May 1805.

Eventually, the third coalition was formed in July and August 1805, bringing together, around England: Russia, Austria, Naples, and Sweden.

Hostilities opened in late September. Having abandoned his plans to invade England by the end of August – thus long before the defeat of Trafalgar (October 21, 1805) – Napoleon rusheed towards southern Germany and confined the Austrian army of Karl Mack von Leiberich in Ulm, where it was soon obliged to capitulate (October 17). The French took Vienna without resistance (November 15). The decisive meeting took place at Austerlitz on December 2nd: the Austro-Russians were routed.

Prussia, about to join the coalition, immediately signed the Treaty of Schönbrunn (December 15). Austria was compelled to undergo the Treaty of Pressburg (December 26) that expelled it from Germany and Italy, and signed the death of the Holy Roman Empire, whose sovereign was previously Emperor Francis II.

English, Russians and their associates Neapolitans (reduced to Sicily) and Swedes continued the war.

It formed when Prussia – which refused the reorganization of Germany performed by Napoleon I – joined the countries that had remained at war with France at the end of the Third Coalition (October 1806).

The operations took place in two stages. The first campaign, in Saxony, saw the Prussian army destroyed in a single day: twin victories of Jena and Auerstadt, (October 14, 1806). The 27th, Napoleon entered Berlin. The second campaign was held in Poland the following spring; the Russians resisted at Preussisch-Eylau (February 8, 1807) but were defeated at Friedland (June 14).

The Treaties of Tilsit (7 and 9 July 1807) brought back peace at the price of the dismemberment of Prussia. They also provided the basis, in their secret clauses, of a Franco-Russian alliance.

Sweden, for its part, had already signed, on April 18, 1807, the armistice of Schlachtow which costed it Swedish Pomerania.

England, again, remained alone or almost, having no other ally than a dethroned King of Naples.

The first failures of Napoleon I in Spain led Austria in yielding to England and to rekindle the war (April 1809).

The French victories of Eckmühl (April 22) and Wagram (July 5 and 6) forced Austria to sign the Peace of Vienna (October 14, 1809), six months after the start of the war.

The coalition had lived. Austria was deprived of substantial portions of its territory. England only had to find new allies.

It was concluded between the Russians, the Prussians and the English in February and March 1813, immediately after the disastrous Russian campaign. Austria and Sweden joined them in August; Bavaria and other German states of second order in October.

The initial victories of Napoleon at Lützen (May 2nd, 1813), Bautzen (May 20 and 21) and Dresden (August 26 and 27) were followed by the defeat of Leipzig (Battle of the Nations, October 16, 17 and 18) during which the French army had to deal with an enemy twice in number. Germany was lost for the Napoleonic Empire and must be evacuated.

The war continued in France in January 1814. The Emperor made a final demonstration of his military genius, gaining a winning streak that failed, however, to repel the invasion. Paris fell on March 30, 1814. Napoleon abdicates on April 6, at Fontainebleau.

The Battle of Waterloo (June 18, 1815) promptly brought an end to the adventure of the Hundred Days. On June 22, Napoleon abdicated for the second time. On July 6, the Allies entered Paris.

On November 20, the second Treaty of Paris deprived France of Savoy, County of Nice and strongholds on the northern border.